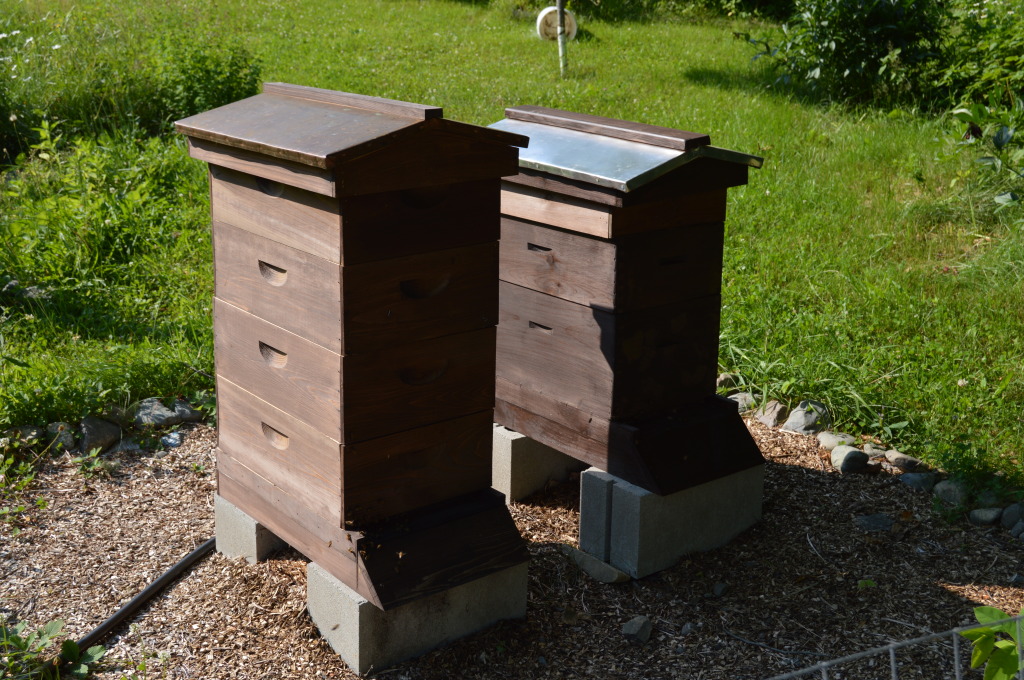 It was such a long cold winter that we were certain that our one little bee hive hand not survived.  In February I went out with my stethoscope and listened while I knocked on the side of the hive and nothing.  I was sure they were dead.  So I ordered another nuc to replace the hive.  Well along came a warm day in March and I went down to the hive.  On top of the snow was hundreds of brown spots and a few dead bees.  The brown spots were, uh hum, bee poop.  Bees will not go inside their hive, they are very clean insects, they wait for a warm day and they take what it called a cleansing flight.  So that day I found out that the bees had made it through the winter.  We were so excited but now we had more bees coming so what to do.  Well, we ordered another hive from a beekeeper friend who builds them.

As you can see from the picture we had it built to match the first hive.  The new one is on the right.  The older hive is doing great.  We have put a honey super on and are in hopes of getting a little honey for us this year.  Last year we didn't harvest any so that the bees could have it all.  It is probably good that we did so they had enough food for the winter.  We will do the same with the new hive this year.  By next year we hope to be able to harvest from both.

The above pictures are of installation of the nuc into the new hive.  The green box is how the nuc arrives.  This contains 5 frames of already drawn comb with a queen, brood that she has laid and a lot of working bees.

When we got home with the nuc we set it beside the new hive and opened the box so that the bees could get out to feed and drink.  We let them settle down for a couple of hours since they had traveled over Maine's pot hole roads to get home.  When we opened the nuc you could see the bee activity.  The frames were very active.  The five frames from the nuc were placed into our hive body.  We put another super of frames on top so the queen could lay even more brood.  You can see a few stragglers still in the nuc box.  We just left the box next to the new hive and they found their way to their new home.

We are having so much fun with the bees but mostly we are just leaving them alone to do their thing.  There are many things in bloom for them to make honey with so sweet things to come.

The largest building project on the homestead this summer has been the new chicken/garden shed.  My husband had shoulder surgery at the end of March so he was unable to help much.  Don't get me wrong, I love to build things, but sometimes a second set of hands comes in real handy.  He was able to help me with the roof a little.  We built a platform from a pallet and strapped it to the forks of the tractor.  I rode the platform while he operated the tractor to lift me up and down while I hauled up the metal pieces and screwed them down.

One end of the 8 x 16 foot building is the housing for our meat birds and the other is a garden shed.  This building is between the house and the garden so it is a perfect place for me to keep all my garden tools etc.  Right now they are in a shed that is located on the other side of the house from the garden. 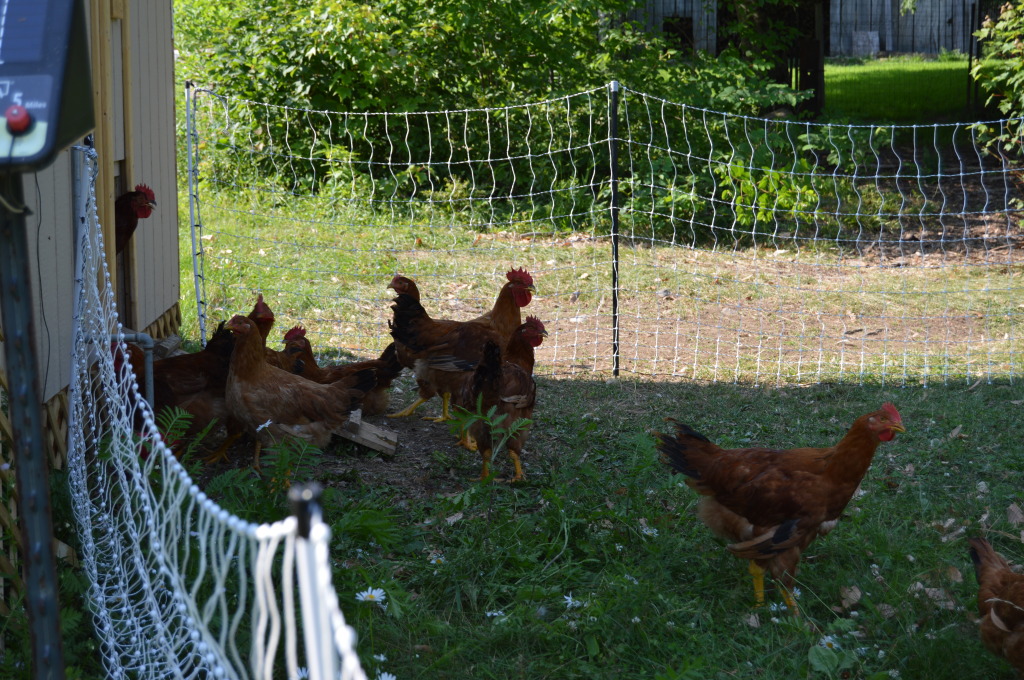 This year we are raising Red Rangers on pasture for meat.  We had such a great loss last year with the Cornish Cross that we had raised the past 20 years that we decided to try something new this year.  So far we have only lost 3 of the 40 birds that we started with.  The big test will be how they dress out when we butcher them in a couple of weeks.  There is a second batch of chicks coming from the hatchery about the time we butcher these.  They should be ready for the freezer sometime in September.  As I said we are raising them on pasture with the woven electric fence.  I can move the fence when the area they are in starts to get a little beat up.  I don't want the birds to take the pasture down to bare ground so I move them as necessary.  The grass grows back very well since it has been fertilized :).  I'll let you know how these dress out for us.

The strawberry harvest has come to a close.  My wonderful husband picked the last of them from our 100 or so plants.  We were able to freeze whole berries to use in our breakfast smoothies.  I think when we were all finished there were 4 gallon bags in the freezer.  That of course does not count the countless number that we ate along the way.  I took the last of the harvest and made ice cream with them today.  It will be a treat this evening after my husband gets home from work.

I have gotten into making kefir everyday and we use that and homemade yogurt in our smoothies.  Our local natural food store stocks unpasteurized milk that I make the kefir and yogurt with.  We sweeten with just a bit of honey add greens like kale then a few strawberries and blueberries.  It is a full meal when whirred up in the blender.

The garden has been planted from the seeds that I started back in April.  I really enjoy gardening but to be honest I'm not very good at it.  Everything is always great when I get it planted then along come the weeds and I seem to never be able to get ahead of them.  I know I need to mulch to keep the weeds down but I never seem to get to it.  It is hard to come by straw here in Maine since no one really grows oats or wheat so I use wood chips.  All the chips that we did this spring went down on the inside of the hoop house on top of the cardboard.  I'm trying to get that area doing much better so I can use it next year.

I did purchase a small 6 x 8 foot greenhouse from Harbor Freight.  It is still in the barn in the box since I need to level the ground where I want to put it.  It will go in the front yard where I took out the two peach and two apricot trees that did not make it through the winter.  My goal is to be able to grow greens during the winter, or at least maybe until January before the real cold hits.

Well, time to move the soaker hose in the garden to the green beans.  Visit with you soon.